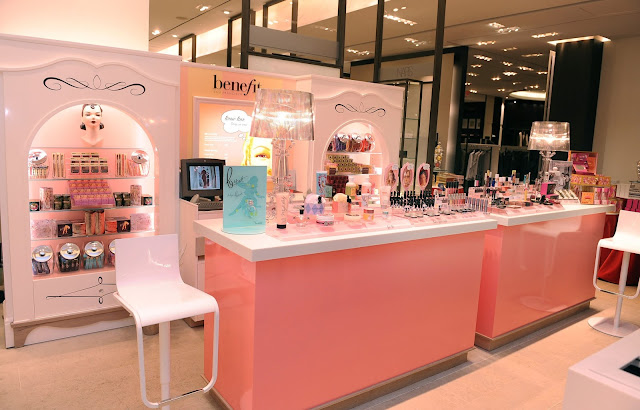 I thought that for today’s post, I would let you know what goes on during the Benefit Cosmetics interview process to become a BeneBabe or Beauty Advisor.

Whether you are just curious or you are planning on getting a job at Benefit, it’s handy to know the different steps of the process, from when you hand in a CV/Resume to when you are offered a job.

I’ve been through this process twice, one time where I didn’t get the job and another where I did. (I will be focusing more on the second time around because it is most recent but I will also be comparing differences between the two experiences as I go along.

So here are the steps I went through:

This time around I heard about a job opening a Benefit from a friend of mine who knew the manager of a Benefit counter. They had already told her about me and she told them to get me to drop in a CV which I did. The first time around, I think I just applied for an opening online.

The next step, both times, is that you receive a phone call sometime after you have handed in your CV. This could be as soon as the day after or can be a few weeks later.

I think both times that I got the phone call about 3 or 4 weeks later when I had assumed I wasn’t going to be hearing from them.

The first time I applied, the phone call was a phone interview where I was asked a bit about myself whether I was in college or working, my makeup application skills, and why I wanted to work for Benefit.

At the end of the phone interview, I was told a time and place where I would have to do an audition later that week.

This time around, I had no phone interview, I was just told a time and a place for a sit-down interview, to wear black, and also that there might be an audition afterward if they could get enough girls who were available that day (the other two girls who went to the audition said that they both had phone interviews before the sit-down audition. I had missed Benefit’s original call so I had to ring them back at about 5 or 6 so they probably didn’t have time then to do a phone interview then).

Anyway, on to the sit-down interview. I arrived at the Benefit counter about 5 mins early but the girl on the counter was busy. When she was finally free, she told me that my interviewer was across the road in a coffee shop waiting for me.

I was a bit worried then because I only had like two minutes to get there before I would be late. I rushed across to the coffee shop and maybe was one or two minutes late which the interviewer didn’t seem to notice.

The person who interviewed me worked for Benefit and I think she was a regional recruiter or something, that she dealt with recruiting all the Benebabes in her region although she had a different job title as well.

She was really lovely and friendly which made the interview go pretty smoothly. She asked me the usual questions like why I wanted to work for Benefit, along with my employment history, if I preferred working alone or in a team and then asked for specific examples of things I had done in my previous jobs, eg. “tell me about a time when you had a difficult customer and how you dealt with it? Tell me about a time when you had to be sensitive to the needs of a customer?”

She also asked me about targets and how I felt about them and if I had worked with targets before. At the end of the interview, She told me I had gotten to the next stage and there would be an audition in a local Debenhams in an hour’s time.

On to the worst and most daunting stage of the process; the audition.

I had done it before, so I felt okay about it though I was still nervous.

The first time I applied for the job, about five or six other girls and I arrived in Debenhams and were brought into a back room where we were shown five products that we needed to focus on selling on the shop floor later that day.

I can’t remember exactly what products they were but I think one was Benetint, and some others were the Porefessional, They’re Real mascara, and maybe a skincare product.

The woman from Benefit in Debenhams told us some information about each product like what it did, some important ingredients, and how to sell it which was pretty useful for the next stage.

We were told to practice selling on each other for a while and then we were brought to the shop floor.

On the shop floor, we were sent around to traffic stop people, which is basically where you approach customers who are shopping around Debenhams and get them to come back to the Benefit counter with you.

We were told to approach them and ask if they had heard of Benefit before and then convince them to come and try out a few products at the counter.

We then would show them the products one item at a time and apply them to their face while explaining the benefits of each item. In my first audition, I got about 5 or 6 people to come back to the counter and try out some products.

I think I only managed to sell 1 product; a Porefessional. After about two and a half hours of traffic-stopping and show people the products, I was told that I was unsuccessful and to go home.

My second time around, the audition was a pretty different experience. It was just me and two other girls.

This time we were pretty much thrown in at the deep end. We arrived at the counter and we told all about traffic-stopping and within a few minutes, we were sent out to find customers.

I knew a lot about many of the products from using them myself and my previous experience so I was okay.

This time around we only had 2 hours to do the audition, whereas the first time, they said it could be up to 4 hours.

In the two hours, I brought several people back to do makeup on and sold 5 or 6 items so I was pretty confident afterward that I might get the job.

None of us was told to go home during the audition this time but we were told that we would find out in a week or two how we did.

About a week later, I got a phone call letting me know that I had gotten through to the next stage; a store interview.

So if you were applying for a job in Debenhams, you would have to have an interview with the Debenhams store manager. I was given a time and place for my interview and told to wear black.

I don’t want to say which store my interview was in because it didn’t go too great. Let’s just say that this interview and my first one with the lovely, friendly woman from Benefit were like night and day.

In this interview, I was asked a lot of the same questions again, eg. why do you want to work for Benefit? What are your makeup application skills and experience?

Looking back, the interview was actually fine, but I just got the feeling throughout that the interviewer didn’t like me.

Then there was an awkward moment at the end when she asked if I had any questions, and since I’ve heard that you should always ask a question at the end to show you are interested, I said yes.

I tried to think for a second but couldn’t come up with anything so had to then say I forgot my question like a bit of a fool.

The interviewer didn’t know when I would hear about the job because she said it would be Benefit who would be contacting me about it. So I went home and waited for a call.

Within a week I got a call from the lovely woman at Benefit offering me a job.

It wasn’t the permanent job I wanted, just a six-week one for Christmas but I decided to take it anyway because Benefit seems like such an amazing company to work for and I love all their products. Also, it’s a great opportunity if you are looking to get into working with makeup.

The woman from Benefit kind of hinted that it was my store interview that let me down, although the six-week job was in the same store so the interviewer couldn’t have disliked me that much.

Anyway, that is my experience with the Benefit application process. I hope this was helpful if you have applied to work for Benefit or have an audition coming up.

I hope you are having a great day and I’ll talk to you soon.

Other posts you may like if you liked “How to Get A Job at Benefit Cosmetics | The Interview Process”: