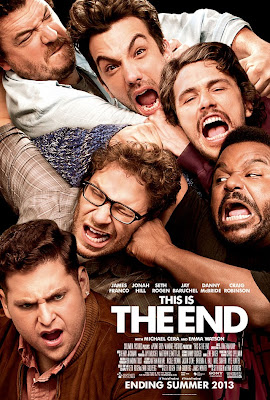 Hey Guys! Today’s post is a little different from usual; a film review. I want to do a film or book review every so often on my blog but not every week or two because I still want my blog to be mainly beauty and fashion based, and don’t know if all my readers will enjoy reading these type of  posts. Please leave a comment below after reading this post telling me if you would like me to do more or not 🙂

So I went to the cinema last week with my friends and we decided to go see This is the End. It wasn’t any of our first choices but we had already seen a lot of the other movies between us already. We decided on This is the End mainly because we thought it would be funny to see a movie with lots of celebrities in it playing themselves and trying to survive the end of the world; and it was 🙂

The movie has many A-list celebrities featured in it including Jonah Hill, Seth Rogen, James Franco, Michael Cera, Jason Segel, Emma Watson, Rihanna and Channing Tatum [But he is only in it for a minute at the end. Do not make the same mistake that I usually do and go to see a movie because he is in it, only to find that he has been killed off after the first five minutes 🙁  and I will warn you that the same thing happens for some of the celebrities in this movie]

The movie starts with Jay Baruchel arriving in L.A. to visit his childhood friend Seth Rogen and Seth decides to bring him to a party James Franco is throwing later that night. There are tons of celebrities at this party all acting crazy and it’s really funny to see them acting as themselves, but some (if not all)clearly acting a very exaggerated version of themselves or of what others portray them to be to make the movie a lot more entertaining. After a while at the party, the start of the end of the world occurs when the ground violently shakes and the celebrities see that outside the Hollywood Hills are on fire, with people dying all around them. A few of the celebrities barricade themselves in James Franco’s House and then the rest of the movie is them trying to survive together in the house, dividing rations, trying to get along with each other and defending the house and themselves from the demonic creatures outside, all with very humerus results.

Overall, It is a very funny action-packed movie, with some scary scenes even, that I found entertaining for the entire duration and didn’t find myself bored at any scene. I would really recommend seeing this movie if you have ever wanted to know how a group of celebrities would react to the end of the world and what would happen to them, or if you just needed a good movie to go and see with your friends.

Hope you liked this post 🙂 Have you seen this movie? What did you think of it? Did you agree with me or did you absolutely hate it? Leave a comment below.