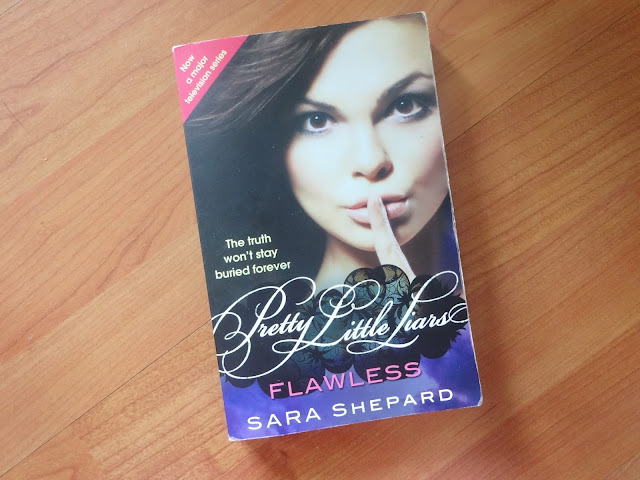 Hey guys, today I am reviewing the second book in the Pretty Little Liars series by Sara Shepard. I didn’t review the first one because there wasn’t much to say about it. If you have seen the first episode of the series, then you pretty much could skip the first book because it’s basically the same. The reason why I decided to read the PLL series is that I heard it was different to the TV show and I found out who A turns out to be in the books. The A in the book is different to who it is the show and I was just intrigued to see how the author would reveal the whole thing.
This book has a different plot from any episodes of the show although they both kept some of the big storylines in common. I liked that it was sort of an extension of the episodes for most of the book because I love Pretty Little Liars so it was nice to read more about the girls. The books aren’t the best written books and they aren’t particularly gripping but they are a nice, easy read. The story in this book sort of unfolds while the girls are preparing to go to a charity event called Foxy. There are a lot of romantic dramas as well as a few creepy texts from A. It is so difficult to tell you about this book without any spoilers because almost everything that happens feels like a bit of a spoiler. The best part of this book comes at the end when something that I really wasn’t expecting happened. I was so so shocked by the ending. It completely caught me off guard.
I wasn’t crazy about this book throughout. It was an alright story but I wasn’t dying to find out what was going to happen next like in the TV series. I’d like to think that if you haven’t seen the show that it would be more interesting and exciting but I think that it still wouldn’t be that much. The one thing that is making want to read the next book, other than the fact that I already have it because I bought the first three together, is the ending. It made me excited to see what’s coming next. I think though, that if the next book is more like the start and middle of this book than the ending that I will just skip to the book where they reveal A because there are so many books between this one and the reveal that I can’t see myself reading them unless they get a bit better. The next book in the series is Perfect and I will make sure to write a review once I have read it letting you know what it is like. Hopefully, the book series will start to get a little more exciting in that book.
I hope you enjoyed this post! If you did, make sure to save it on Bloglovin or give it a +1 on Google Plus. Have you read any of the PLL books or watch the TV show?? Let me know in the comments section below. Have a great day everyone and i’ll talk to you soon!