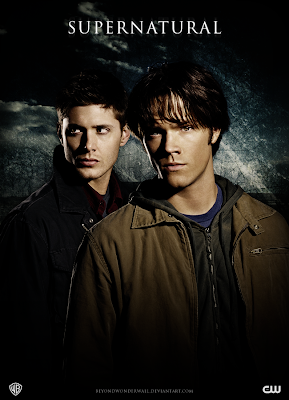 Hey guys, today’s Friday Favourite is the television programme Supernatural. I used to watch this when it first came out when I was like 13 and I absolutely loved it. I watched it on TV back then so when the first season ended, I kind of forgot about it during the break and then missed the second season when it came back so I ended up never watching it again until now. The main reason I decided to start watching it again was that I kept seeing funny GIFs about it on Tumblr and it reminded me of how much I loved it (and Dean 😛 ) when I was younger.

I’ve started from the start again because I couldn’t really remember it, and I’m now halfway through season one. I just think it’s so good, I love scary things and anything supernatural so that, combined with the humour that Sam and Dean’s brotherly banter brings to the show, is just really great to watch. It’s not too scary though which I like but I do remember being absolutely terrified of the Bloody Mary episode in season one when I was younger 😛 This time around, however, it wasn’t as scary.

Dean is my favourite character. He is so funny and absolutely gorgeous. I remember being obsessed with him when I was younger (and maybe I’m starting to become a little obsessed with him again now :P) I’ve been watching it every night for the last few nights and I can honestly say that I’m hooked again. I’ve heard that it gets really good later on so I’m so excited that I’ve got that to look forward to and that I have around eight seasons to watch before I am up to date. It will definitely keep me from being bored over the next couple of months and I’m so glad I started watching it again.

I don’t think it’s a show for everyone though, you probably wouldn’t like if you are easily scared or just prefer to watch things that are a bit more true to life. However, If you like scary movies, the paranormal, or even just think you would like to see two brothers travelling around trying to solve mysteries then I would definitely recommend watching it. You should at least watch an episode or two before you decide 🙂

Hope you liked this post 🙂 Do you watch Supernatural or is it just not your type of TV show? Leave a comment below.