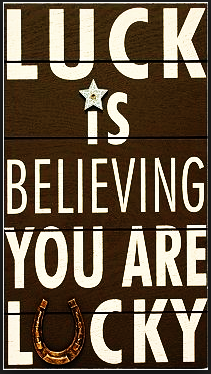 Happy saint Patrick’s day everyone!! So, because it is saint Patrick’s day, and I am Irish, I thought that I would talk to you all about luck. We’ve all heard of the phrase “The luck of the Irish” and I don’t know about the rest of the Irish, but I do think that I have a certain amount of luck on my side. I’m not lucky when it comes to winning competitions or anything, which rarely, if not ever happens, but there have been a lot of times when it seemed like there was no way that things would go my way and it turned out alright in the end. Whether it’s getting a college assignment submitted for the deadline and doing quite well even if I only did it the night before, catching a train on time when an hour before, my friend and I were lost and running through the streets of Paris, or randomly deciding that I want to change half of my degree in the second semester of third year and getting away with it. I think that this luck may have started out a just being luck, but over time I have begun thinking that, even if it seems like there is no hope, that it will somehow work out, and the majority of the time it does.
I saw this quote, and thought of how a lot of times in life when I thought that it would somehow work out, and that a problem would eventually resolve itself, that it actually did. The quote also reminds me of one of the Harry Potter books where Harry pretends that he gave Ron a lucky potion so that Ron would do well in a Quidditch match and Ron ends up doing well anyway because he thinks that he is lucky. The belief that he was lucky gave him the confidence to succeed. I think a lot of so called luck is a mixture of confidence and belief that it’s going to work out no matter what while doing everything that’s in your power to make it happen, and being pessimistic is only going to bring you down and ensure that it won’t end up okay.
I hope you liked this special saint Patrick’s day post. Make sure to leave a comment down below telling me of any times that you were lucky or of any time that didn’t seem like things were going to work out but they did in the end.