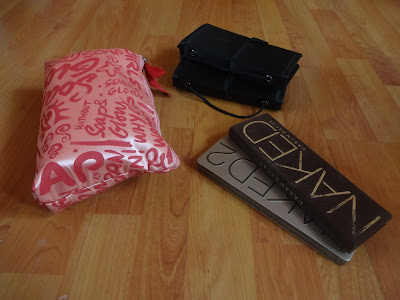 Hey Guys! As ye know I love makeup… a lot, so you can imagine how hard it was for me to narrow down my makeup to everything that I need to bring with me to France for four months. Even though I did in fact narrow it down, I still think that I managed to pick a lot of things to bring because I’m going for quite a long time and didn’t know what kind of things I would need. So I narrowed it down to two brush belts of Real Techniques brushes, two eye shadow palettes and a fairly big makeup bag of all the other makeup I need and a few of my favourite Sigma brushes. 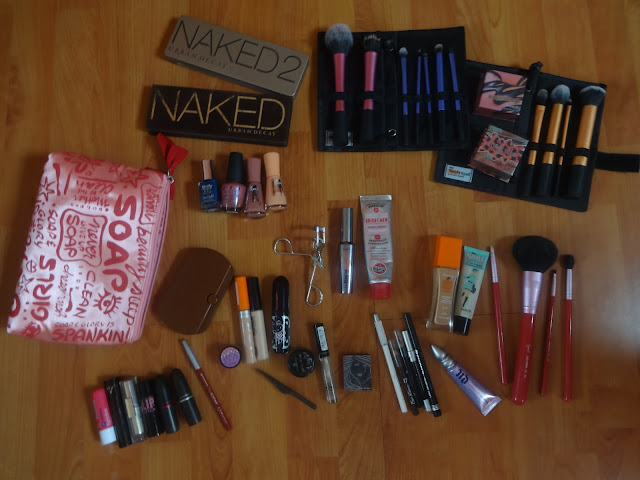 I know this looks like quite a lot but you have to remember that this has to do me for four months, If I was only going for a couple of days or a week or something I wouldn’t take half as much.

The first must have that I needed to take was makeup brushes, I picked the Real Techniques starter set, the core collection, stippling brush and blush brush. I also decided to take the Sigma F30 large powder brush (for powder and bronzer), the Sigma E40 tapered blending brush (because it’s good for blending out my eye shadow and creating a smokey eye), the Sigma E30 pencil brush ( to use when highlighting my inner corner or to bring the shadow under the eye) and the Sigma E65 small angle brush which is my favourite brush for eye liner. If I was only going away for a couple of days I would only bring the RT starter set, stippling brush and blush brush like I did when I went to Paris in May. 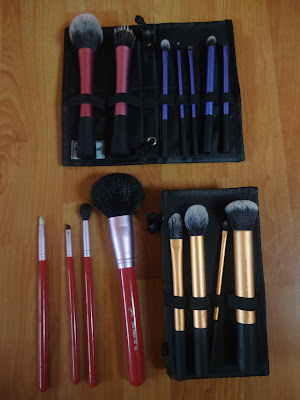 The next essentials I picked were face products. I chose the moisturiser Bright Here, Bright Now from Soap and Glory to make my skin look more radiant. I chose Benefit’s The Porefessional as my primer, Rimmel’s Wake Me Up foundation and Bourjois’ Délice de Soleil Bronzing Powder. I then decided to bring loads of concealers (I don’t know why), which were Soap and Glory’s Trick or Treatment, a limited edition Mac Hello Kitty one, Rimmel’s Wake Me Up one and Benefit’s Erase Paste. I didn’t add any powder because my Rimmel Stay Matte powder fell and shattered so I might just buy one over there. 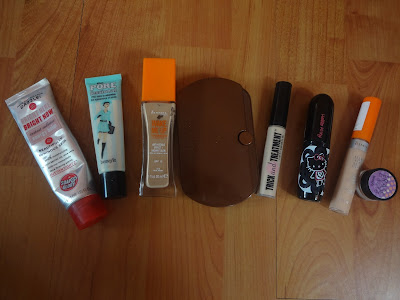 The next few things I chose were eye makeup. I first chose a few brow products like a Sigma shadow to fill them in (It’s called Scarlett but it’s a lightish brown colour), a pair of tweezers and some Catrice brow gel. Then some eyelash curlers and They’re Real mascara, followed by a number of different colour eyeliner pencils, an Essence eyeliner pen and Essence gel liner in black. I also decided to bring a tube of Urban Decay’s Primer Potion to make my eye shadow last longer. 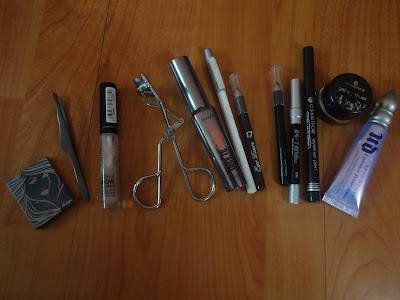 Next onto the eye shadows that the primer is making last longer 😛 I’m taking the Urban Decay Naked and Naked 2 palettes because they are great for everyday eye shadows, which is what I think I need mostly for college classes and day trips and things, but there are also some darker colours for night time. I decided to leave my Mac 15 eye shadow palette at home because I didn’t want to risk losing it or shattering any of the eye shadows while travelling but it gives me a good excuse to use my Naked palettes a bit more again. 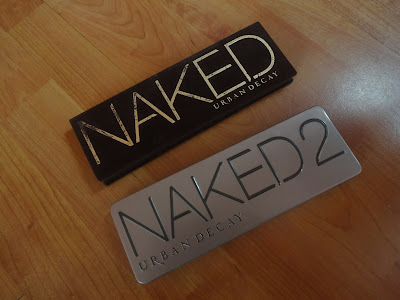 I decided to bring only two blushes which are my favourite two, Sugarbomb and Coralista which I’m just thinking now are both very summery blushes *adds 17’s Blush in the colour First Kiss to bag 😛 I’m sure I’ll still wear the Benefit ones anyway because I love them. 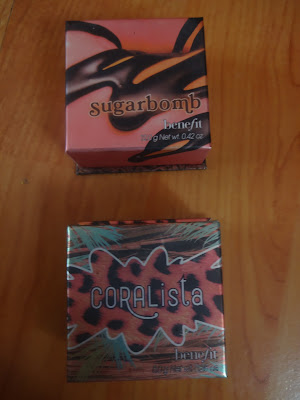 I chose to bring a lot of lip products because I usually choose a lipstick by however I feel on the day. I thought that bringing a lip balm would be a good idea for winter in case my lips get chapped. Then I chose number 7’s Classic Rose, L’Oréal Caresse Lipstick (101 tempting lilac), Soap and Glory’s The Missing Pink, Mac’s Viva Glam V, Mac’s Shy Girl and an Essence Lip Liner in the colour red blush (to go with Viva Glam V). I though those were a wide range of lip colours for every occasion and mood. It has now occurred to me that I should have taken the pictures with the lipsticks open and the colours showing but for some reason I didn’t think of it when I took them and now they’re all packed away. I will probably do some kind of lipstick post in the future anyway so you can see them or just update this when I get to France. I also decided to bring another lipstick last minute and added it to my handbag because I was watching Keeping Up With The Kardashians and Khloé was wearing a gorgeous bright orangey/red lip which reminded me of my No 7’s gay geranium. (which I original didn’t pack because I thought I wouldn’t be bold enough to wear it and that it mightn’t look that nice anyway) 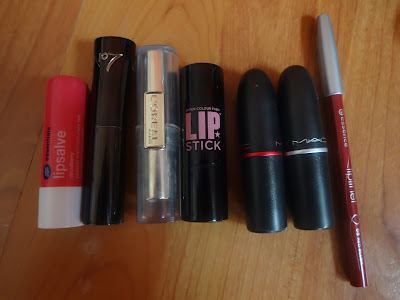 Lastly, I chose to bring some nail varnishes. I chose Bourjois’ So Laque Nail Varnish in the colour Beige Glamour, Not SO Bora Bora-ing Pink from O.P.I., Barry M Gelly Hi-Shine Nail Paint in Blue Plum and another Bourjois So Laque but in the colour Abricot Ouaté. I just like them all and use them fairly often so chose them to bring. 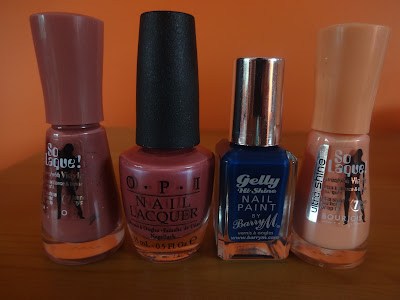 So that was my travel beauty essentials 🙂 Hope you liked this post. It’s now 3 in the morning because I was working today, trying to pack and was exhausted when I came home from work so it’s a couple of hours later than I intended it to be posted but I prefer to write at night anyway 🙂 The next time I post I’ll probably be in France, and hopefully it will be in the next few days once I get my internet sorted and everything. Good Night xx