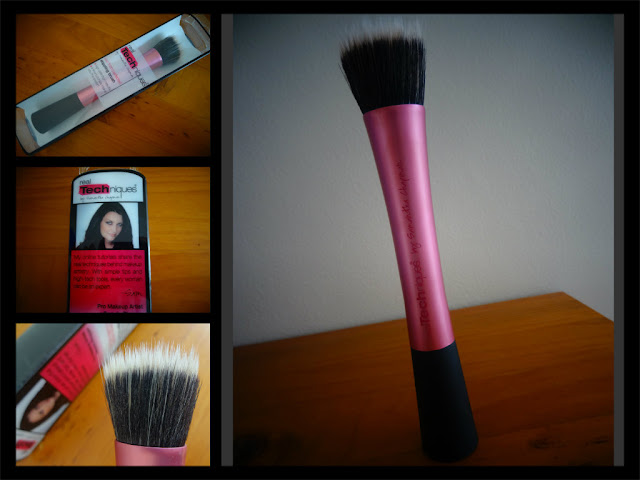 Hey Guys! Today’s Friday Favourite is the stippling brush by Real Techniques. I got this just over a week ago in my Amazon haul and I’ve been using it everyday since. When i first saw it I was a bit surprised at how small it was because i was expecting it to be around the same size as the Sigma F50 Duo Fibre Brush, but it was a lot smaller with the head of the brush probably half the size of the Sigma F50.
I thought that using the stippling brush would take me a lot longer to do my face with than the Sigma F50 but it doesn’t. Whereas i had to using a pointed foundation brush to apply my foundation before to get enough coverage and use the Sigma F50 after to blend it out and give it that air brushed look, now all I use is the stippling brush; its small enough to get in around my nose and under my eyes, and it buffs a decent amount of coverage on my face leaving my makeup looking flawless so my foundation actually takes a shorter amount of time than before.
When I was researching it to decided whether or not I should buy it though, I found that a few other people who have bought the stippling brush have had a problem where it has fallen apart after a few months of using and washing it, but this in a very few cases and mine isn’t showing any signs of this.
There is also a chance that those people might have been too rough when washing their brush or that they had received a faulty one. Mine seems fine for now but i will keep ye posted if anything like this happens in the next few months. But my stippling brush’s bristles seem strong and not likely to fall out anytime soon.
I also think that it is such good value for money for such a good quality brush and this is one of the main reasons that I still bought in-spite of the few bad reviews (that and the hundred of reviews raving about how good it was). It is such a soft brush but is made from taklon so that it gives better coverage by not soaking up a lot of product like a brush with real hair would do. I would really recommend this brush and am going to use it to apply my foundation from now on.
Hope this helps with your decision if your thinking about purchasing this brush 🙂
If you have this brush, have you had any problems with it or do you agree thats it’s amazing?
Please leave a comment below. I would love to know what everyone else thinks about this brush.
-MissLauraBora xx
Other posts you may like:
Shy Girl Mac Lipstick Review
Get to Know Me in 21 Questions
Soap and Glory Peaches and Clean Review